Laura Parsons, sister of Dawn Bailey, kindly shares with us the reason they will be taking part in Rainbow Ramble in July.

“I never imagined I would lose my sister at the young age of 43. Dawn was a bright and colourful person who had a natural skill at making, and maintaining, hundreds of friendships. She always made the effort to stay in touch with people and would be the first to send a “how are you?” message, when others (like me!) maybe take longer to get in touch. She loved bright colours in all aspects or her life – her wardrobe, home furnishings, nail colours and even her hair, which she had red for quite a few years.

We were so alike in many ways, but our houses and wardrobes were very different! We both love to wear Birkenstock sandals in the summer. Dawn’s are all bright red, yellow etc. and mine are black and navy blue! We both love Orla Kiely, but she always loved the brighter prints. Dawn was diagnosed with a brain tumour while she was pregnant with her daughter Ruby back in 2010. It was such a stressful and scary time for us all, but after she had surgery (after Ruby was born) we all remained positive and Dawn tried hard not to let it affect her life too much. She was monitored closely and had more treatment around 5 years ago before the tumour grew again. After a positive start to her treatment late last year, it unfortunately just stopped working. It came as a huge shock to many of us as we always hoped it would just be something that she would need treatment for every now and then.

Dawn adopted the ‘choose happy’ mantra after going through a tough time in her life and it stuck ever since. When planning her funeral I really wanted to make something to give out to people who were attending. I got in touch with a close friend of Dawn’s who is very talented at paper cutting and asked if she would design something that I could get printed onto badges. She came up with the amazing design and I got 100 printed, which turned out to not be enough for the many many people who came to the funeral. I will never forget the sight of the masses of people queuing to get into the Crematorium. We had requested that everyone wore brightly coloured clothing (of course!) so it was quite a sight! We expected there to be lots of people, but the turnout was unbelievable. She was loved by so many people. We haven’t had any experience of hospice care but were aware of the incredible work St Cuthbert’s do. We are even more in awe of the amazing staff now, we really don’t know how they do the job. We were extremely grateful for the care they gave Dawn in her final week. Even though visiting was still restricted due to Covid, we were able to coordinate visits so that there was always someone there 24/7. During my time with Dawn I played her some of our favourite songs, talked about what was happening in Coronation Street and in celebrity news. I’d play voice notes and read out messages from her many many friends. Dawn was a big social media user so we were able to make use of that and ask friends to send in their messages of love ❤️ When she was able to, we also made some video calls to close friends and to my brother Lee and his family who were abroad at the time.

I found the garden at the Hospice a calming place to sit (usually while waiting for my lateral flow test results!) and on the morning Dawn passed away I waited until the sunrise and managed to capture a beautiful photo that we used on the order of service at Dawn’s funeral. My parents have made it into a canvas and it will remain a special photo for us – a beautiful dawn for our beautiful Dawn ❤️

After a lifetime of hating exercise, Dawn got into running a few years ago by completing Couch-2-5K and keeping up running 3 times a week for over a year after. Even after her illness put a stop to it for a little while, she still tried to start up again late last year. Most of us (me included!) do Couch-2-5K, keep it up for a little while and then give up, but not Dawn! She did also enjoy buying brightly coloured running leggings, so maybe that helped her keep it up for so long. Since she passed away, we discovered she had been a ‘secret cheerleader’ to a number of friends who wanted to start running but wanted to keep it to themselves. So I think Dawn would definitely approve of us doing the Rainbow Ramble 5K – the colourful element alone is definitely in keeping with #BeMoreDawn. We are hoping there will be around 30 or more family and friends on the day. All hopefully wearing extra bright clothing for the occasion!”

Thank you so much to Dawn’s sister Laura and her family for sharing her story with us. Rainbow Ramble takes place on Sunday 3rd July at Lambton Park Chester-le-Street. 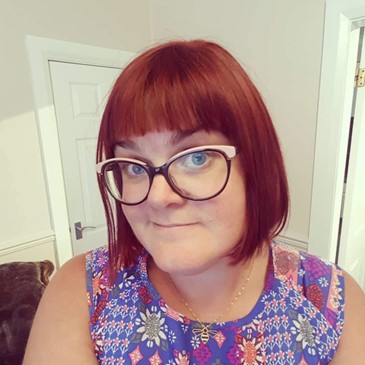